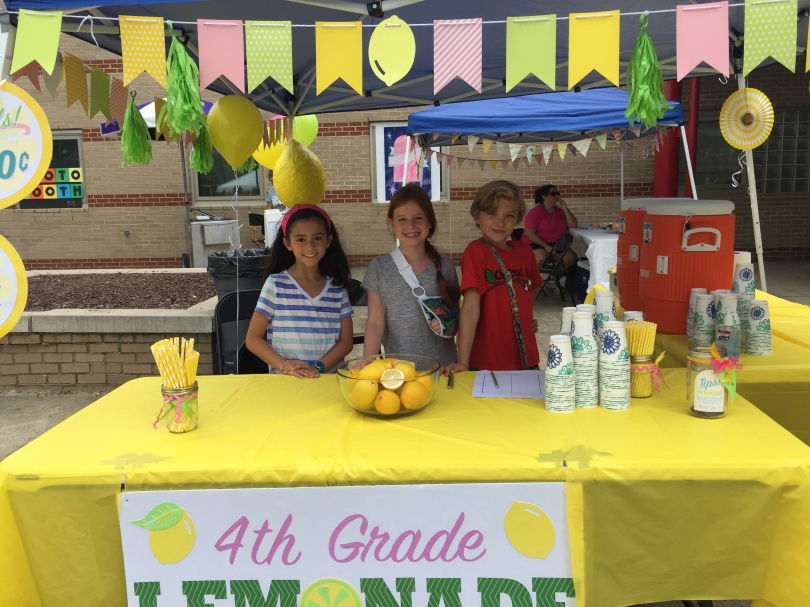 Fourth grader Asia Heilig had a very loud Fall Festival.
All for a good cause, of course. Heilig was one of many fourth graders who staffed the lemonade stand that greeted visitors to the annual festival, urging them – loudly – to quench their thirst.
“We yelled a lot of stuff, especially me,” Heilig, a member of the Forest View Journalism Club, said following the festival. “I had to walk all the way down to the playground to yell ‘get your lemonade.’ “
Her efforts helped the fourth grade class raise more than $400, which goes to offset fourth grade field trip costs.
Many students reported their favorite game was the Cake Walk, a musical chairs-esque game in which participants walk in a circle in hopes of landing on a winning number.
“The cupcake walk was extremely difficult for some people,” said fifth grader Leo Rainey “I had to try like 9 times before I won.”
Not all students had such difficulties. One fifth grader won at least three times, and brought some cake in the following Monday to share with his class.
Caroline Kaye’s favorite game was Plinko – in part because her brother was a volunteer staffing it and in part because it’s an easy game. She won a yoyo.
Several students said they appreciated the lollipop tree – which offered a free lollipop to every student.
Annabelle Ferreri, a fifth grader, noted that students who got a yellow lollipop received a free Locopop. She added that she won – and devoured — two Locopops during the festival, but declined to say whether her parents had given her permission to over-indulge like that.
Fifth grader Peyton Yuan noted that kindergarten teacher Jamie Barnhill engaged in some hijinx out on the flusher – a dunk tank where students take turns trying to drench their teachers.
“At the flusher, this one kid kept missing and was getting really upset,” Yuan recounted. “So Mr. Barnhill pulled the lever and Coach T got very, very wet.”